WE SHALL REMEMBER THEM

Over the past week you will have seen on the news, print media and internet, the New Zealand and international launch of commemorations of 100 years since the declaration of war on August 4 1914, for what became WWI. In New Zealand many branches of the Society and other organisations will over the next four years, be conducting their own commemorative events.

YURU 2014 “Soldiers Tales From The Trenches” is our special event providing us family historians the opportunity to recognise and respect the ultimate sacrifice so many gave. Even if you had no ancestors involved in that terrible conflict or will be participating in other events, we hope you will join our sea of poppies at Paraparaumu Library, be it a silent prayer, a chance of a new discovery, a historical check of events, a look at our resources, a chat with the many experts we will have on hand. Sign a cross on the memory wall.

As a teaser to the main event we have a display in the Arts Space at the library from August 9.

Present at the Expo will be military historians Howard Chamberlain, Waikanae and Ray Seymour immediate past Director, National Army Museum to help identify photos and memorabilia; together with  ArchivesNZ, National Library, Ministry of Defence Library, and National War Museum, to help with your research. Te Papa National  Museum will be present explaining their “Berry Boys” project of identifying glass negatives found recently of WWI soldiers and the launch of a book on the subject, with some special offers on this and other publications. On-line access to research resources will be available and the Alison Procter Family History Centre will be open with help on access to WWI resources. Free Wi-Fi available, free entry.

Research your WWI soldier, get help with finding military records, bring along those photos, medals and memorabilia for identification. See the YURU presentation of the stories of 8 local soldiers who made the ultimate sacrifice.

SOLDIERS’ TALES FROM THE TRENCHES

The story of one of the soldiers from Kapiti Coast who did not return home from WWI and to be told at the Why You Are You event at Paraparaumu Library on 16/17 August.

Joseph was born in 1892 in New Zealand. He was the son of Elizabeth and George Cornwall who lived in Paraparaumu.

On his enlistment, Joseph Martin Cornwall was working in the Waikato he was posted to 16th Company, Auckland Infantry Battalion as a Private soldier.For the next five weeks he underwent initial military training. Whilst his Service File provides no indication of where this training was undertaken, this probably would have occurred in Alexandra Park in Epsom, Auckland. This Park was designated a ‘military camp’ and it is where the Auckland Infantry Battalion was formed and trained.

On the 16th October 1914, Joseph finally departed for his ‘big adventure” overseas. Whilst his Service File provides no detail on which ship he actually embarked on, on that day, 8,444 New Zealand soldiers departed from Wellington on ten Troopships. These ships included “His Majesty’s New Zealand Troopships “Maunganui”;“Tahiti”; “Ruapehu”; ”Orari”;”Limerick”; “Star of India”;“Hawke’s Bay”; “Arawa”; “Athenic” andthe“Waimana”. (It is not recorded if the regiment entrained to Wellington or, if the ships called into Auckland to collect the regiment.)

December 1914 the convoy reached its destination when it berthed at Alexandria, Egypt. From Alexandria Joseph and the remainder of the Auckland Battalion entrained for Cairo with the Battalion occupying a location at Zeitoun where the New Zealand Brigade proceeded to establish its training camp. Training then began in earnest to prepare this Battalion for front line duties. At that stage, nobody knew where this action was likely to occur, or when it was likely to commence.

From the time of arrival at Alexandria 1914 until April 1915 Joseph and the regiment saw very little in the way of battles, most of the time was spent training and moving around from camp to camp.

On the 9th April 1915, Joseph and the Auckland Battalion entrained for Alexandria and from there departed for Mudros Harbour on the Greek island of Lemnos, on the transport “Lutzow”. They were going to Gallipoli.

On the 23rd April 1915 all the ships in Mudros Harbour started to maneuver into their allocated positions for their intended landings on the Gallipoli Peninsula. The mood was buoyant. 100,000 men from Britain, France, Australia and New Zealand lined the decks of their respective ships, all singing their own National Anthems to the accompaniment of their battalion bands. Two days later the landing commenced.

Before dawn broke on that Sunday the 25th April, the 16th (Waikato) Company was still asleep on the deck of the “Lutzow” as it silently slipped out of Mudros towards the western shore of the Gallipoli Peninsula. The remainder of the Auckland Infantry Battalion plus two companies from the Canterbury Infantry Battalion – totaling approximately 1,500 men, was to land on that day. The Australian’s landed first, as planned, at dawn. Their task was to establish a beachhead. The New Zealanders were intended to be in reserve that day and were certainly not expected to be involved in any fighting. But things went wrong. A fatal error by the Navy had the troops landing on the wrong beach and they were immediately confronted with sheer cliffs, steep ravines, broken country and all covered with thick thorny scrub.

From 8.00am the Auckland Infantry Battalion started to wade ashore and by 9.00am the Battalion was formed up on the beach and was moving north. Joseph and his 16th (Waikato) Company were bringing up the rear. Orders were given to reinforce the Australians but the terrain the leading elements encountered, especially the unscaleable cliffs, meant that this task was impossible.

About midday the Auckland Battalion was recalled from this impossible task and was given new orders to approach “Plugge’s Plateau”. Private Joseph and his 16th (Waikato) Company were now leading the advance. Soon men were being killed and severe casualties were being taken from shrapnel and from the well-aimed fire from the Turkish snipers. At about this time, the level of casualties within the Auckland Battalion meant that the Battalion, as such, ceased to exist. What was left of the 16th (Waikato) Company was clinging to a position around feature “Pope”. But there was no structure left. Soldiers from one company found themselves occupying positions allocated to other companies. There was no longer any resemblance of Battalion or Company command. Whoever was alive – and capable – took control of whatever men they could gather together. Every officer and every sergeant in the 16th (Waikato) Company was now a casualty. By the time of the next day, only 34 men from the original 226 men of the 16th (Waikato) Company of the Auckland Infantry Battalion were alive. Private Cornwall was one of the 192 men from his Company who was killed on that dreadful day.

Private Joseph Martin Cornwall was initially reported as “missing and wounded” and later that same day his disappearance was again reported. This time the cable indicated that he was now “believed dead”. On the 16th January 1916, with the final withdrawal of all allied troops off the Gallipoli Peninsula, a Board of Enquiry was conducted at Moascar Camp in Ismalia, Egypt. As a result of witness statements, the Board concluded that 12/941 Private Joseph Martin Cornwall was “killed in action.

Kapiti Genealogy’s annual Why You Are You programme takes on a different slant this year. Instead of a family history story from a national identity, which in recent years has included ballet dancer Sir John Trimmer, actor Dame Kate Harcourt and trombonist Rodger Fox, YURU 2014 is a World War I commemoration venture.

A joint venture with Kapiti Coast District Libraries, Soldiers’ Tales From the Trenches, a registered national WW100 activity, will be an Expo of events and memories, providing help and assistance to learn more about those military ancestors. The centre piece will be presentations of family stories of ten local soldiers who lost their lives in the war and which will screen continuously during the event.

Invitations to the Expo have been extended to our modern military forces, military historians to identify photos and memorabilia, ArchivesNZ, National Library, Ministry of Defence Library, National War Museum, Te Papa National Museum with displays and research expertise to help members of the public. On-line access to research resources will be available and the Alison Procter Family History Centre will be open. An NZSG information and sales table is also planned. 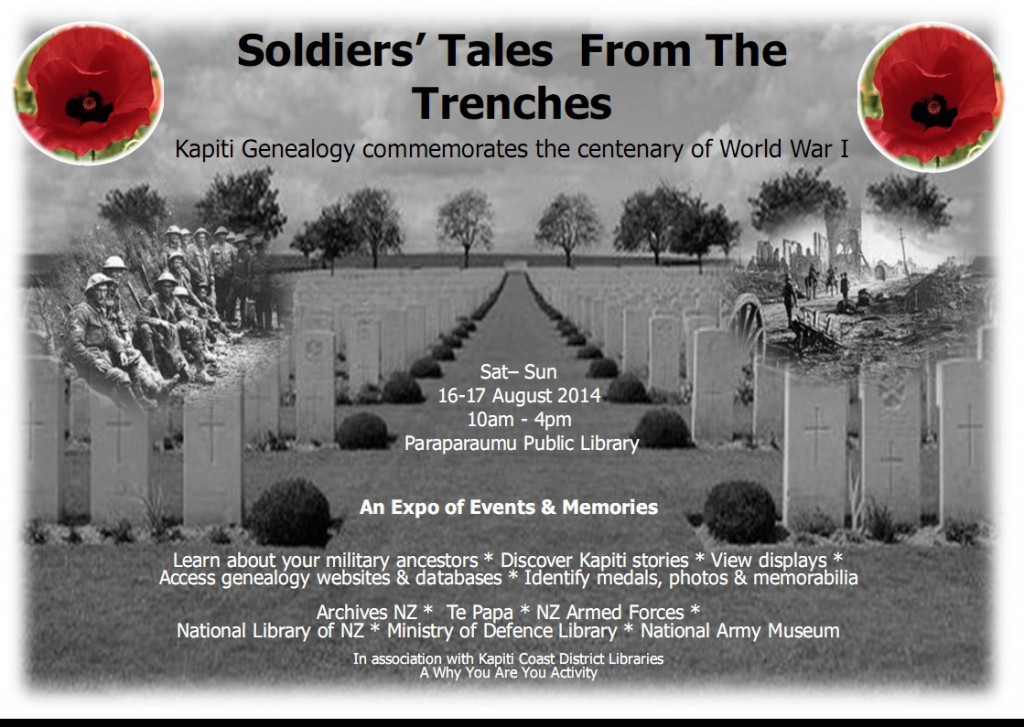